Why Does The Underwire Pop Out Of My Bra? 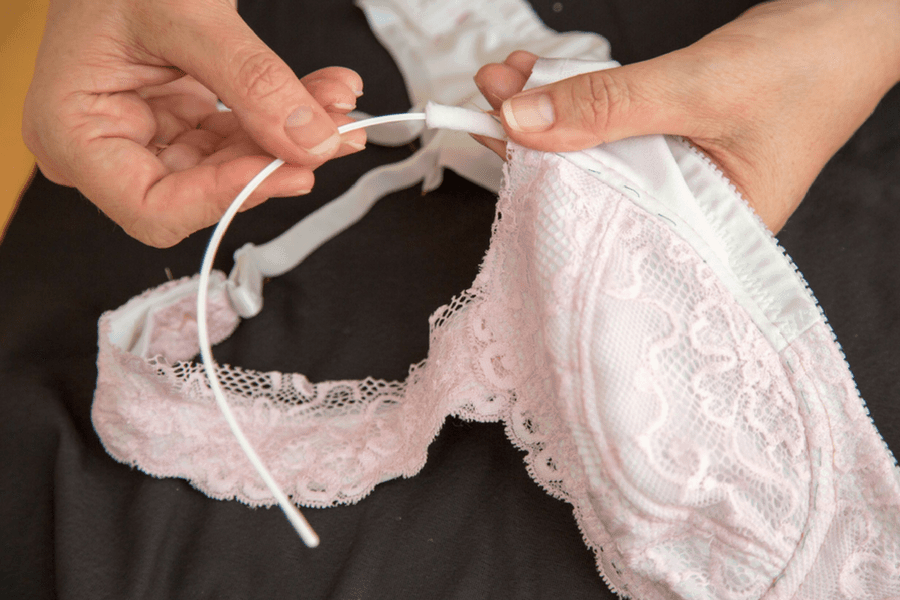 A piece of underwire that pops out of your bra is uncomfortable and annoying. But, it’s not uncommon. You’re not the only woman walking around in a bra that required her to push the underwire back in before putting it on. There are reasons, however, why the underwire in your bra poked out of the fabric.

Here are the most likely reasons why the underwire pops of out of your bra (so you can avoid the issue in your next bra):

The bra hasn’t been laundered properly.

Poor laundering takes its toll on your bra. The proper way to launder a bra is to wash it by hand in the sink and let it air-dry on a flat surface. Tossing the bra in the washing machine exposes the bra to the harsh cycle. However, it’s the high heat from the dryer that poses the biggest threat to the bra and its underwire.

A dryer’s heat causes the bra to heat up, then cool down. This process quickly ages your bra. The underwire may pop out of its casing and the bra loses its elasticity overtime due to the extreme heat.

The bra band is too big.

If your bra band size is too big, you may find the underwire pokes through the material. Your bra band is designed to fit snugly so it keeps the bra in place. A band that’s too big won’t stay in place though. Instead, the bra will move as you move. This means the underwire is also moving around within its casing, which can cause the underwire to pop out of the bra.

Get a professional bra fitting if you think this is why your underwire is poking through. The bra fitter will determine the best bra size to ensure your next bra fits perfectly.

Related: How Tight Should Your Bra Band Be?

The bra is low quality.

Not all bras are created equally, and you will get what you pay for. You can expect a cheap bra to lose its shape, expose underwire or show other signs of aging sooner than a more expensive bra. Cheap bras are made with cheap materials and fabrics, making it much more likely that underwire will pop through the low-quality material.

There are ways to get good deals on good bras. Sign-up for your favorite lingerie stores’ e-mail lists so you will get access to discounts and annual sales.

The bra is worn-out.

Every time you wear a bra, it stretches to conform to your body. So, even the highest quality bra will get worn-out with years of wear, which can also cause the underwire to pop out. That’s why it’s best to have three to four go-to bras on rotation. This extends each bra’s lifespan. You never wear one bra too much, and you give each bra time to revert back to its original shape after each wear.

The best way to ensure you’ll get plenty of use out of a bra without the underwire popping out is to buy the right bra size and take good care of it. But, don’t be disappointed when the underwire pops out years later. It’s a sign that you did a good job of extending the bra’s shelf life, and now it’s time to buy new.